Washoe Tribe of Nevada and California 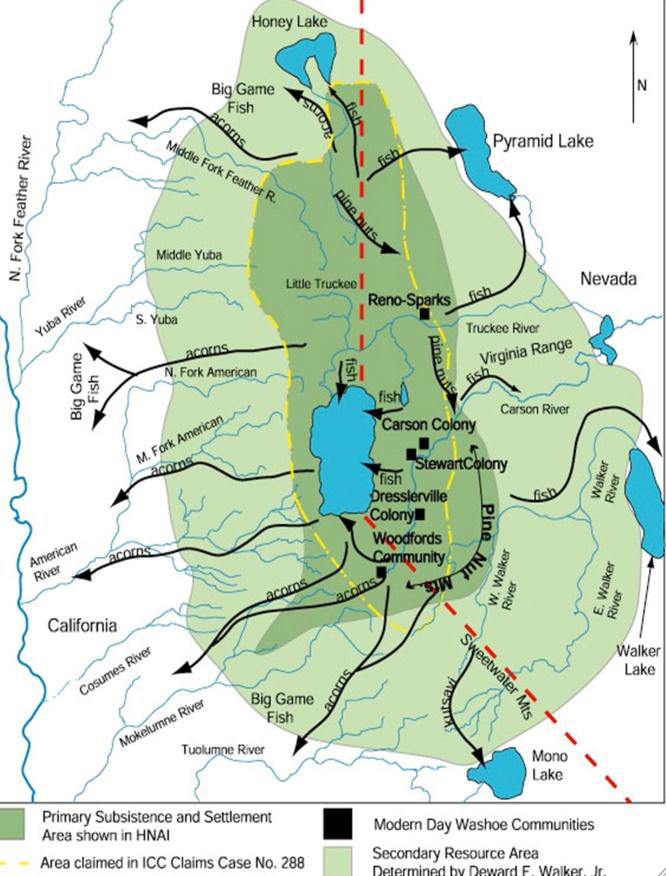 The Wašiw people are a distinct people who share commonalities with both the Great Basin and the California Cultures. The family unit is the core of the tribe. The families comprised the local groups and the local groups made up a band. The Wašiw were recognized by what part of the territory they came from. The four directions of Wašiw territory was occupied by different bands of the Wašiw that made up the whole of the tribe. Although one tribe, each band was unique in its own area of occupation with subtle differences in cultural diversity and language patterns.

Summers were spent at Da.aw and all parts of the territory. Large Cutthroat Trout lived in all the lakes and streams along with freshwater clams and other fish once plentiful, sustained the people throughout the year. Large and small game was once plentiful. Plant gathering for food, utilitarian and medicinal use is still harvested in all parts of Wašiw lands. During the fall the Wašiw traveled to the pine nut hills to gather Tag.m (pinion nuts) or to the western slope of the Sierras to gather Malu. (acorns). The fall was also time for hunting. Rabbit drives were conducted throughout the valleys at the designation of the Rabbit Boss, and the meat and pelts gathered were used to sustain the people through the long winters. During the winters the Wašiw would travel to lowland valleys where the harsh winter snows felt by the Sierra Mountains would be bearable. When the snows started melting, it was a time for renewal and it was time to begin the cycle of life again.

The California gold rush followed by the subsequent silver rush in Nevada a few years later, thousands of miners and immigrants flooded Wašiw lands in a relatively short time period and they stayed here, disrupting the balance; the Wašiw world changed forever in a few short years. The demand on the natural resources by the immigrant population depleted much of it. The logging industry denuded the forests and scarred the Pine Nut Mountains to support the mining industry and towns that sprang up everywhere. The fisheries of Lake Tahoe once bountiful with the native cutthroat trout had been reduced to nothing and livestock replaced the native herbivores.

- A. Brian Wallace, Former Chairman of the Washoe Tribe

Wašiw has been classified as a distinct branch of the Hokan language family known as Washoan.  Although, the language is considered to be a language isolate by many. The uniqueness Wašiw language is directly related to the uniqueness of the Wašiw homeland. The Wašiw fought to maintain their language in the face of a government that once vigorously tried to exterminate the language.  Boarding Schools were built on the principle of “kill the Indian, save the man” in hopes of pushing the Indigenous people towards “civilization.” However, in light of draconian policies and practices of the Federal Government the Wašiw people have been able to maintain our language and culture for the future.  In the mid 1990’s an immersion school was started by a handful of Wašiw elders and parents who saw a lack of Wašiw language and culture as the primary cause for a multitude of social ills that Wašiw youth were struggling to overcome. This led to the creation of “Wašiw Wagayay Ma.al” or “the house where Wašiw is spoken”, a language immersion school dedicated to the revival of the Wašiw language and culture. All mediums of education were taught from a Wašiw centric worldview. Meaning, that Wašiw notions of relationship, respect, tradition, and responsibility were founding principles for the operation of the school.

The language, culture and the people cannot be separated. The language is the identity of the Washoe People.”

Since the closing of the immersion school, the demand for language and culture among youth has only increased. The Cultural Resource Department, which now houses the Language Program, has taken on the task of language and cultural revitalization within the Wašiw Tribe. However, this is not a new struggle; it is the continuation of what our elders have started. Without the perseverance of the people who have fought to maintain the Wašiw language and culture for the future, our people would not be here. It is this struggle for cultural survival and acceptance that we look to overcome so that future generations of Wašiw people will not have to fight anymore, but can live as Wašiw people.

Our elders tell we have been here in the beginning, and we are still here in our lands”